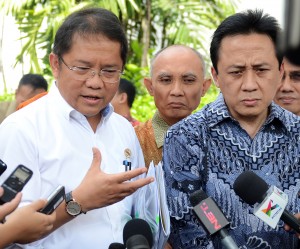 Head of BEK, Triawan Munaf and MoCI, Rudiantara submit a plan for the implementation of the National Creative Consultation Week, at the State Palace, Jakarta, Friday (24/7

President Joko Widodo (Jokowi) has expressed his willingness to attend the 1st National Creative Consultation 2015, which will be held in conjunction with the inauguration venue of Indonesia Convention Exhibition (ICE), in Bumi Serpong Damai (BSD), South Tangerang, Banten, early August.

The willingness expressed by the President Jokowi when receiving the National Consultation Steering Committee headed by the Head of the Creative Economy Agency (BEK) Triawan Munaf and Minister of Communications and Information (MoCI) Rudiantara, at Merdeka Palace in Jakarta, Friday (24/7) afternoon.

“He was very welcoming this event, because we need this international venue,” Munaf Triawan answered reporters about President Jokowi reaction when he received a report about the plan of the implementation of the national consultation.

Triawan explained, the ICE that is owned by the company Group of Compass and Sinar Mas is a good place to display the works of the nation. He said, with an area of 117 thousand square meters equipped with 10 halls without pillars, and then ICE became the biggest venue in Asia, as well as answering complaints about the needs of a great venue to display the works of the nation.

In a release distributed by the 1st National Creative Consultation Committee I, President Jokowi is scheduled to conduct a direct dialogue with approximately 100-150 creative economic actors. In addition, the President Jokowi also will open the “Investors meet Investor”, and the grand opening of ICE, which is scheduled to be held on August 4, 2015.

“During these the innovator is far from the investor, there is a distance. Now we will bring them in this venue. At the same time we will also feature activities Creative Economy Agency, which has just finished its institutions,” Triawan Munaf said.

In addition, MoCI continued, will also be shown the application work of the nation as well as social media messaging system, such as Countrymen, Emass, and so on. Also the application is given to the fishermen, as mFish has been done to the 900, the target until September about 20 thousand more. “So many applications there,” he said.

When receiving the National Creative Committee consultation, President Jokowi accompanied by Minister of Research and Technology and Higher Education M. Nasir, and the Special Staff of President Teten Masduki. (GUN/AGG/ES)