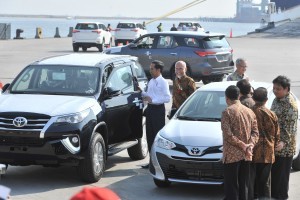 For the record, Toyota has exported cars to Asian, African, Latin American, Middle Eastern, European, and Australian markets in the past 30 years and this year the export has surpassed one million cars.

On that occasion, President Jokowi also praised the Japanese car manufacturer for using local content comprising 74-94 percent in their products and expressed hope that the use of local content by Toyota would help boost local industries. He also stated that exports and investments are important to strengthen the economy as well as to solve fundamental economic problems.

“If we can boost our export, we can solve trade balance deficit and current account deficit,” the President said, adding that he has also ordered his Cabinet to swiftly handle the current economic problems.

In the meantime, data of PT Toyota Motor Manufacturing Indonesia shows the company has exported Fortuner, Kijang Innova, Vios, Yaris, Sienta, Avanza, Rush, Agya, and Townace and the highest exports were recorded last year with a total of 199 thousand cars. During the January-July 2018 period, Toyota had exported a total of 117,200 cars, a 1.3 percent increase from 115,800 cars in the same period last year.