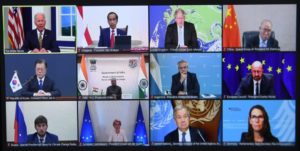 President Jokowi attends the virtual meeting of the 2021 Major of Economies Forum on Energy and Climate, Friday (17/9). (Photo by: Presidential Secretariat/Lukas)

“President of the United States Joe Biden has invited a number of countries to attend the forum and President Jokowi is one among 10 heads of state and government in attendance who also spoke before the participants in the event,” Deputy Indonesian Minister of Foreign Affairs Mahendra Siregar said.

The forum seeks to facilitate cooperation among key developed and developing countries in an effort to generate concrete actions necessary to achieve a successful outcome at the upcoming Conference of Parties (COP26) in Glasgow on November 2021 and to guarantee that global temperature will not increase more than one degree (Celsius).

On that regard, the forum underscored the importance of Nationally Determined Contributions (NDC), namely the national plan consisting of program framework reflecting commitment of each country in response to climate change.

The NDC is in line with the focus of the Forum, which is transition to new and renewable energy.

“In response to initiative of President Biden on global methane pledge, President Jokowi confirmed his support by putting forward an open process through transparent and participative mechanism. In Indonesia, efforts to cut methane emission was covered in the Indonesian NDC that has been updated and proposed to the UN and UNFCCC,” Mahendra said. (PRESIDENTIAL SECRETARIAT/UN) (RAS/EP)