President Joko Widodo: No More Stalled Projects Due to Licensing 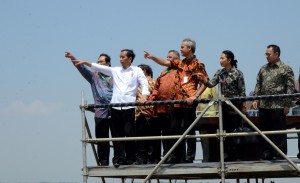 President Joko Widodo has asserted that there should be no more stalled projects due to either licensing issues or land acquisition. The President wishes the projects are running as soon as possible.

“I will pay a visit to check this again all of suddenin one, two, three months ahead,” the President said when inaugurating the construction of Steam-fueled Power Plant (PLTU), in the coast of Ujung negoro village, Kandeman subdistrict, Batang Regency, Central Java, on Friday (28/8).

The construction of a 2 x 1000 MW capacity PLTU worth USD4 billion is to resume after a four-year delay. The Government cooperates with a private company PT Bhimasena Power Indonesia to resume the development projects that will supply power to the islands of Java and Bali.

The President emphasized that the project under the scheme of the Public Private Partnership (PPP) is based on an open, competitive, transparent and accountable process. The President went on to say that this project should serveas an example for thecooperation pattern of public and private infrastructure development in Indonesia, given the fact that the State Budget (APBN) is not enough to build the entire infrastructure needed by the people of Indonesia.

The Government, the President added, will work hard across sectors to make a breakthrough to overcome bottlenecks that arise in the construction of power plants.  Otherwise, Indonesia will experience a power crisis by 2019.

The President affirmed that no one would disagree that electricity is one energy source that is very important.

The President reminded that children across the border must be able to study at night, and fishermen can store theircatch in a cooler. “Small convections, stalls, and small enterprises can live, and all it requires electricity,” the President explained.

Teten Masduki, the Presidents Communications Team member, in a press release on Friday (28/8) said that the Government is targeting the electrification ratio until the end of 2019 at 97 percent and 99 percent in 2020 of the number of households in Indonesia. Therefore, within a period of five years (2015-2019) a number of power plants areto be built up to 35,000 MW.

“Those are based on the growing electricity needs from day to day, which is consistent with economic growth. In order to respond to the demand for the growingpower supply, the addition of power plant capacity must still be held,” Teten said.

“The construction of power plant aims to bring benefits for the people,” Teten explained.