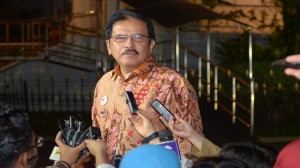 President Joko Widodo (Jokowi) asks the ministers to establish good communication with the media, and avoid the answer “no comment”. The President also asked the ministers not to issue regulations, or circular letter without prior coordination with the relevant parties.

“President Jokowi deliver the message that the regulations issued by ministers must be coordinated in advance.”Ministers are not allowed to issue its own regulations. Suitable for a ministry, but the impact is less suited to other ministries”, Coordinating Minister for Economic Affairs, Sofyan Djalil said, after attending the meeting at the Presidential Palace in Bogor, West Java, on Monday (16/2).

Sofyan Djalil said that the meeting took place with a relaxed, starting at 19:00 until 21:30 pm, at the Garuda Room. This meeting was held in order to synchronize the vision and mission, and build coordination.

Here are the agendas that are discussed in the meeting, as follows:

*   Accelerate the appointment of the echelon I to immediately manage and absorb of the budget in 2015;

*   The ministers as much as possible not to answer “no comment” to the question of media; and

*   Boost the economic growth above 7% on average for 5 years.