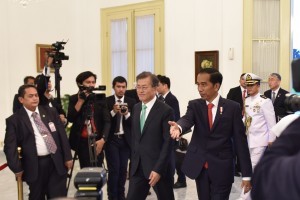 President of South Korea Moon Jae-in says that he and President Joko Jokowi Widodo have something in common that is to prioritize the people and to develop a just economy. Based on this similarity, President Moon believes that the meeting with President Jokowi is a good opportunity to grow common understanding between the two countries.

I am sure that this meeting will strengthen bilateral relations of both countries, President Moon said in a joint press conference at Bogor Presidential Palace, West Java, Thursday (9/11) evening.

In addition, the President of South Korea also says that both leaders would enhance the cooperation on economic sector and agree to enhance as well special strategic partnership with ASEAN, as well as to achieve peace in all over Asia.

Both countries will also increase economic cooperation that more prioritizes the people and they have agreed to increase the value of the cooperation up to 30 billion until 2022, which value is double from the current figure.

Indonesia and South Korea will also increase the cooperation the needed by the people such as water management, electricity, and also cooperation in other sectors, such as automotive, tourism, environmentally friendly industrial energy, maritime, and small and medium enterprises.

Third, Indonesia and Korea will cooperate to make the Asian Games in Jakarta, in the upcoming September, successful. Fourth, cooperation at regional and global levels will also be enhanced. President Moon hopes that cooperation with ASEAN can be realized and he also adds that President Jokowi gives full support to address the issue in Korea Peninsula.

I would like to thank President Jokowi for his support to achieve peace in Korea Peninsula. In the near future, I will invite North Korea counterpart to have a dialog concerning denuclearization, President Moon said.

At the end of his statement, the President of South Korea invites President Jokowi to visit his country in order to materialize the cooperation discussed in this meeting and President Jokowi has received this invitation.

On the visit, President Moon is accompanied by Minister of Foreign Affairs Kang Kyung-wha, Minister of Trade, Industry, and Energy Paik Ungyu, Minister of Land, Infrastructure, and Transportation Kim Hun-Mee, Ambassador Extraordinary and Plenipotentiary of South Korea to Indonesia Cho Tai-Yung, as well as other special staffs and deputies.