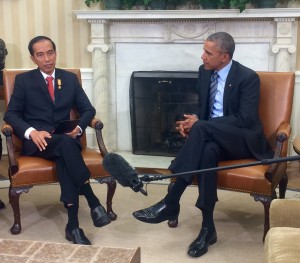 After a bilateral meeting at the Oval Room, both leaders delivered a joint press release, which was attended by the reporters from several countries, including the Indonesian reporters who accompanied the President during the visit.

President Barack Obama said that he is pleased to receive President Jokowi and the Presidential entourage to the White House and he considered that the visit would bring great opportunities for the strong relation between the two big democracies.

I obviously have a personal relation with Indonesia because I spent my childhood in Indonesia and have Indonesian relatives, President Obama said in the press release with President Jokowi.

According to Obama, partnership between Indonesia and the US is important for the US considering the fact that Indonesia has a large population and plays an important role in the South East Asia.

Moreover, he added, Indonesia is also the largest muslim population country which have a tradition of  tolerance and moderacy.

Indonesia is an important country for us, particularly in trade and economic development sectors and we are still hoping to strengthen cooperation between the US and Indonesia, President Obama added.

Regarding his meeting with President Jokowi, President Obama also said that they discussed several issues on trade and cooperation relation between the two countries, particularly on digital economic development which becomes a great opportunity in Indonesia.

Moreover, they also discussed cooperation on defence, particularly on maritime in the improvement of Indonesias modernization potentials and the importance of ASEAN in the East Asias forum in order to maintain rule of law in South East Asia.

As of the discussion on terrorism, President Obama asserted that it is a good chance to deliver possitive messages against Islamic State in Iraq and Syria (ISIS) radical group and also to spread peace as a moderate Islamic country.

We discussed several global issues on defence and health (prevention against epidemic) which are common and global interests, Obama said.

Furthermore, during the meeting, both leaders also discussed the handling of peat land fires and student exchange, both of which were the manifestation of the promotion of cooperation between the US and Indonesia.

I welcome the efforts made by President Widodo to carry on the democratization process and to promote partnership between the two countries both in strategic sectors and also other sectors which are considered  important sectors for the two countries, President Obama added.