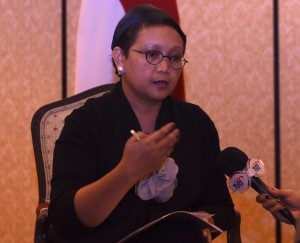 In the discussion that will take place at the second day of the Summit, President Joko Widodo will explain Indonesias approaches to handle extremism and terrorism.

Furthermore, as explained by the Minister of Foreign Affairs Retno L. P. Marsudi on 14 February 2016, the President will also explain the cooperation that must be established between ASEAN and the US regarding terrorism handling.

The Minister said that Indonesia was chosen to lead the discussion because the soft power approach that Indonesia used, really impresses other countries.

The approaches taken by the President of Indonesia to handle the terror attack on 14 January is really appreciated by international world. Wherever I go, they, firstly, express their sympathy and condolences, and then, they express their appreciation. Even, several countries express their admiration to the measures taken by Indonesian Government to handle that attack, the Minister said. (SLN/UN/EN)(MMB/YM/Naster)