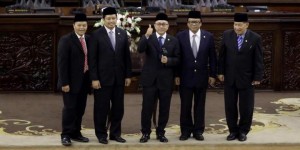 President Susilo Bambang Yudhoyono (SBY) expressed appreciation towards leadership election process of the Indonesian People’s Consultative Assembly (MPR) for the period of 2014 to 2019 that took place since Tuesday (7/10) afternoon to Wednesday (8/10) at 4.20 pm.

“He (President SBY) gave an appreciation of the process which already underway,” said a spokesman for the President, Julian Aldrin Pasha, shortly after landing together with the entourage of President SBY at Ngurah Rai Airport, Denpasar, Bali, on Wednesday (8/10) afternoon.

As reported previously, after going through a long trial process since Tuesday (7/10) morning, the former Minister of Forestry Zulkifli Hasan (51) of the National Mandate Party (PAN) was elected as Chairman of the Indonesian People’s Consultative Assembly (MPR-RI) for a term of 2014-2019, in the plenary session of the MPR-RI, led by the temporary Chairman Maimanah Umar and Ade Rizki Pratama, on Wednesday (8/10) at 4:20 pm.

In the election conducted by the voting system, Zulkifli Hasan joined in package B carried by parties which are members of the Coalition of the Red-and-White (KMP), Golkar Party, Gerindra Party, Democratic Party, National Mandate Party (PAN), and the Prosperous Justice Party (PKS).

In voting, Package B which consists of Zulkifli Hasan (PAN), Mahyudin (Golkar), EE. Mangindaan (Democrat), Hidayat Nur Wahid (PKS), and Osman Sapta Odang from Regional Representatives Council (DPD) obtain the support of 347 votes ahead of Package A, which obtain 330 votes. Whereas one abstention.