President SBY: I Will Have a New Duty, to Take Care of the Earth 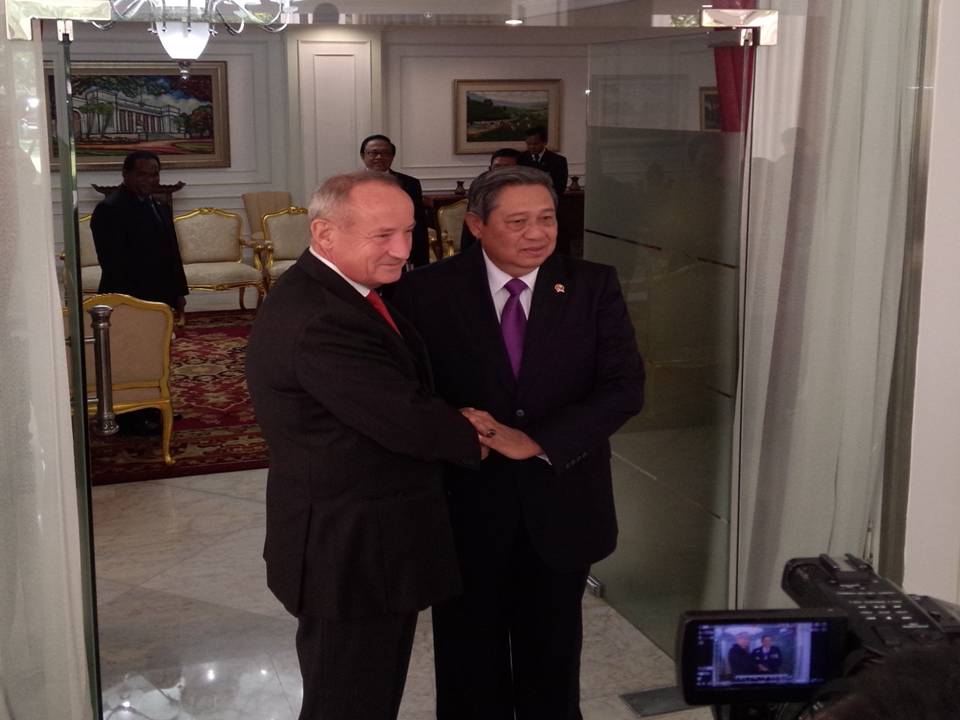 President Susilo Bambang Yudhoyono (SBY) asserted that he is preparing himself to assume a new duty that he will carry out after he ends his tenure as the President of the Republic of Indonesia.

Ill have a new duty … to take care of the earth, President SBY said to journalists when they were waiting for the Global Green Growth Institute (GGGI) delegation in the Presidential Office, Jakarta, on Wednesday (9/9).

As planned, since November 2014, President SBY will assume his new duty as the President of the GGGI, an environmental organization based in Seoul, the Republic of South Korea.

The GGGI was established on 16 June 2010. The Seoul-based organization is now led by Lars Lokke Rasmussen. The GGGI aims to promote the spirit of green growth, a paradigm which promotes the balance between economic growth and sustainable environmental preservation, especially in developing countries.

The GGGI is the first agenda-based global organization. It is set up by Korea and launched without any assistance from the United Nations. It supports every countrys green growth programs, through its two main aims: to promote widely green growth as a new model for the new growth and to support developing countries strategies for green growth.

The GGGI strives to achieve two main aims, namely environmental protection and economic growth. It works through collaboration with governments. It has 22 member countries/governments and has acquired a number of ratifications.

Duties of the President of the Assembly

The President of the GGGI Assembly is supported by two Vice-Presidents in leading the Assembly. The Assembly is the supreme organ of the GGGI. It meets once every two years in ordinary sessions. Whenever necessary, it holds special interim sessions.

The Assembly is responsible for electing Members to the Council, appointing the Director-General, considering and adopting amendments to the Establishment Agreement, advising on the overall direction of the GGGIs work, reviewing progress in meeting the GGGIs objectives, receiving reports from the Secretariat on strategic, operational and financial matters, and providing guidance on cooperative partnerships and linkages with other international bodies.

Indonesias position in the GGGI is as one of its founding members. Indonesia is still in the process of ratifying its membership in the GGGI. So far, the National Development Planning Board (Bappenas) is appointed to serve as the focal point.

Cooperation between the GGGI and Indonesia is realized through, among others, green planning processes and REDD+ (reducing emissions from deforestation and forest degradation) for sustainable development. The GGGI also cooperates with many regions in Indonesia in implementing green development. Its pilot projects are set up in Central Kalimantan and East Kalimantan.

The GGGIs network can help form the think tank of green development in Indonesia (SBY Center) because Indonesia is rich in natural resources and has many experts coming from various backgrounds, some of whom are difficult to find in other countries research institutes.

SBYs leadership in the GGGI is expected to increase the GGGIs contribution to Indonesia. Furthermore, the establishment of the GGGIs permanent representative office in Indonesia will facilitate the utilization of the GGGIs resources.

The GGGI also opens opportunities for Indonesian researchers and experts to join it as associates and peer-reviewers, so that they can voice Indonesias various interests through the GGGI.