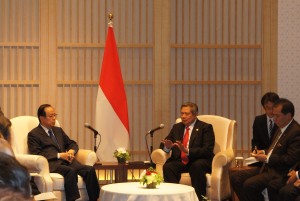 In a meeting attended by the former Prime Minister of Japan, Yasuo Fukuda, and around 15 CEOs of big company from Japan who are investing in Indonesia such as Mitsubishi, Panasonic, and Sharp, President SBY delivered his high appreciation for the sustainability of good relations between Indonesia and Japan.

President SBY said that 250 million Indonesian people who have the increasing purchasing power surely need food, energy, and other needs. It is not excessive if two years ago, the McKenzie Study showed the investment from partner countries and Indonesia itself have reached around US$  500 billion, and in 2030, it was predicted that it will increase to be  US$ 1,8 trillion.

The number US$ 1,8 trillion is not only fulfilled from the domestic since we can only cover for 50% but also from the other countries including Japan for US$ 1.000 trillion, SBY explained.

According to the Head of State, the US$ 1,8 trillion budget will be needed for the development of some fields such as infrastructure, transportation, food, industrial material, telecommunication, services including banking and insurance services, and also the economic field that will increase sharply.

Likewise, the commercial sector, I think there is mutual trade where Indonesia imports goods and services from Japan and the other way round, SBY said.

President SBY also delivered that among 250 millions of Indonesian people, there are 55 million of consuming class that was predicted to hit almost three times the number in 2030 which is 140-150 million. These are the opportunities offered to Japanese entrepreneurs.

The government will continue repairing the investment climate, releasing the right laws and regulations, as well maintaining the right policy, therefore if there is a problem then we will solve it well, President SBY said it while adding that actually the government could move fast to solve several problems that retard the investment.

In that opportunity, President SBY also said that he has met several times with the future President who will replace him in October 20, Joko Widodo. He told him to continue the international cooperation including the Japanese entrepreneurs.

After meeting the Japanese entrepreneur, President SBY and his entourage returned to the homeland through the Kansai International Airport, Osaka, Japan, at 7.30 p.m. local time. (SI/ES)