President SBY: May Our Country Be More Developed Under President Jokowi 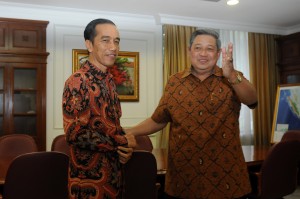 President SBY: May Our Country Be More Developed Under President Jokowi

In the last day as President, Susilo Bambang Yudhoyono (SBY) excused himself to all Indonesian people along with hope that our country could become more developed under President Joko Widodo (Jokowi).

Today, 20th October 2014, I officially end my position, duty and responsibility as the President of Republic Indonesia, President SBY said through his twitter account @SBYudhoyono uploaded some time ago.

SBY and Mrs. Ani Yudhoyono expressed gratitude to God the Almighty who had given permission, blessing, and help in leading this country for 10 years.

I would like to thank all government ranks, both central and regional, for the support and hard work for 10 years, SBY wrote.

He also conveyed his sincere thankfulness to all Indonesian people who had given mandate and support.

Leading a country in the era of democracy and reformation has huge challenges. Alhamdulillah, thank God, with the support of all Indonesian people, I could carry out the duty, SBY said.

SBY continued that in the midst of tough and complex problems, coupled with endless insult and slander, he had to work and continuously work for the people.

With the support from the people, SBY further said, we had scored achievements and success. However, there were still some which we had not fully achieved.

SBY said that as a president he really wanted to do the best, yet he was just an ordinary man who was not free from weaknesses and shortcomings.

My wife and I excuse ourselves. We apologize for all our oversights. We really love you all, Indonesian people, SBY said.

SBY prayed that our country be more developed under President Jokowi. May Allah guide and protect all Indonesian people, he concluded. (WID/ES)