President Suggested the Community Go to PHC Prior to the Hospital 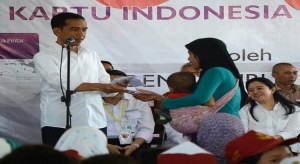 President Joko Widodo (Jokowi) asks the public who have the facilities of Indonesia Health Card (KIS) to use health care facilities with gradually from the People Health Center (PHC).

“The holding of Indonesia Health Card (KIS), if has cough or flu, just go to the health center, it was quite checked at the health center, but when severely ill then referred to the referral hospital,” President Jokowi said, while attending the handover Indonesia Health Card, Indonesia Smart Card, Family Welfare Card and Services Card for Persons with Disabilities at Asri Katon village, Pakis Subdistrict, Malang Regency, East Java, on Thursday (21/5).

President Jokowi said, the recipient of the card is expected to utilize existing facilities and promote wellbeing.

In addition, the Head of State said, the budget that is used for the social (funds) benefits derived from the transfer of fuel subsidies.

In that region, the recipients of Family Welfare Cards 872 heads of family, the recipient of Indonesia Smart Card 742 students and Indonesian Health Card  2,614 people as well as 13 people with disabilities who receive services card severe disability. (Humas Setkab/ES)