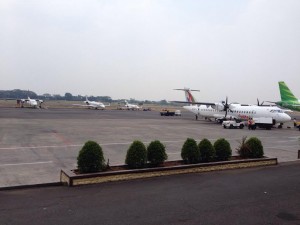 President Joko Jokowi Widodo has instructed Minister of Transportation Ignasius Jonan and Commander of the Indonesian National Defense Forces (TNI) to immediately address problems that emerge related to increasing traffic in airports used as both for military uses (which in this case by the Indonesian Air Force) and civil uses.

In its development, problems and issues have arisen in the operation of those airports, including the issue of development and expansion of the airport, (the use of) the assets, the regulation of flights operating at the airports, (the delineation) of working areas, and the management of air traffic.

The key is a clear regulation so that in its implementation, there will be no disruption and each related sides can support one another, the President said in his remarks before a limited cabinet meeting that discussed the pattern of the operation of enclave civil airports and the use of air space in Southern Java related to the safety and increase in the flight capacity at Presidential Office, Jakarta on Friday (8/1).

The regulation is also very important to minimize danger to flight safety, the President added.

In the meantime, air traffic in the northern part of  Java, the President said, must be gradually reduced and  existing routes must be used more efficiently to ensure the smoothness of flight traffic and flight capacity, especially in Java, Bali and their surrounding regions, as well as to improve the safety of air traffic in busy routes in Java and Bali.

Reducing air traffic in the northern part of Java is also important to optimize the operation of contingency flights if there is an eruption and also to reduce CO2 emission, President Jokowi said as quoted by member of the Presidential Communication Team Ari Dwipayana in his press release on Friday (8/1).

The President has also instructed Minister of Transportation Ignasius Jonan to immediately address the problems by implementing the flexible use of airspace and new routes in southern Java in order to reduce air traffic in existing air route. (TKP/ES)  (EP/YM/Naster)