President: The Single Data Needed to Advance of Agriculture 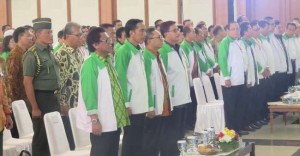 President Joko Widodo (Jokowi) expresses, the government needs a single data of national agricultural to advance the agricultural sector. Without a single data, as long as this happens, it is difficult to design crops, distribution, planting time, and post-harvest processes.

“Moreover, in the event of changes in the growing season due to the influence of global climate change as now. We should jointly facilitate the availability of that single data, President Jokowi said, in his speech when opening the VIII National Congress of Indonesian Farmers Association (HKTI), in Hajj Dormitory Pondok Gede, Jakarta, Friday (31/7) morning.

In addition to a single data, availability of production facilities, including seeds and fertilizers to the farmers at reasonable prices, President said as quoted by the Communications Team of President, Sukardi Rinakit, Friday (31/7) afternoon, is also very important in advancing the national agriculture.

As for empowering the farmers, according to the President, it is very urgent and needs to be pursued all stakeholders is the capital and marketing.

Therefore, he said, the idea of establishment of Bank Farmers need to be studied more seriously so that farmers be dignified, and do not trapped by bonded labors and moneylenders.

The President also expressed, Agricultural Product Marketing, with favorable prices for farmers, it is also necessary to develop a more systematic and modern by involving Bulog and Cooperatives.

“With the increasingly empower of farmers, national food sovereignty to be realized. Such optimism that needs to be built,” Jokowi said.

To support food sovereignty, according to of President Jokowi, we can no longer rely only on rice. “The habit of rice consumption must be reduced, and the local food diversification should be developed in line with the government-run agrarian reform,” Jokowi said.

He asserted, impossible self-sufficiency, food sovereignty and food surplus to be realized if the farmers are helpless and disorganized.

The President then narrates his speech in the opening of the Asian-African Conference on 22 April 2015, which the future of the world is around the equator.

“Sunlight which continuous will make food production, including energy and water, will remain abundant, and we live in this region,” President said.

Therefore, The President reminded, empowerment of the farmers do not just be a slogan or even a political campaign discourse. “Empowering the farmers requires a leap of thinking and concrete steps,” President said.

On that occasion, President also mentioned the El-Nino phenomenon that resulted in some regions suffer of water deficit. President affirmed, El Nino would have an impact on the farmers, especially in the growing season.

To overcome this water deficit, President said, in the short term the government will undertake of pumping program, by adding, the allocation of water pumps which will be given to groups of farmers which suffered drought.

Not only that program, the construction of absorption wells, ponds and dams also need to be propagated. “Do not just complain when the dry season arrives. However, we never noticed the abundance of water during the rainy season, “concluded President.

Attending the event, among others, the Minister of Agrarian and Spatial Planning / Head of BPN Ferry Mursyidan Baldan, and Chairman of the MPR Zulkifli Hasan. (ES)