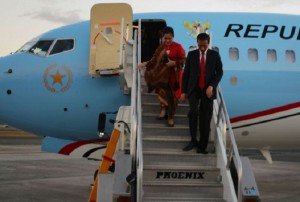 President Joko Jokowi Widodo conducts a working visit to North Sumatra on Tuesday (1/3) morning to inspect Toba Lake tourist destination. It is a follow-up of a limited meeting on 2 February 2016 at the Presidential Office.

I also asserted that branding for marketing, international standard services, arts and cultural attractions with good choreography as well as attractive classy design must be prepared, the President firmly said in the previous limited meeting on 2 February 2016.

Besides visiting Toba Lake, the President will also lead a meeting on the development of Toba Lake with Minister of Tourism, Acting Governor of North Sumatra, and Regents in Toba Lake surrounding areas.

On the first day, the President and his entourage will head to Kualanamu International Airport, Deli Serdang Regency, on Presidential Aircraft. Upon arrival in Kualanamu, they will change the aircraft to a CN-295 heading to Silangit Airport, North Tapanuli Regency and will use cars to go to Toba Lake. On the evening, they will head to Medan to spend the night.

On the second day, the President and his entourage will proceed to Takengon to inaugurate Rembele-Takengon Airport, in Aceh Province. After visiting Aceh, the President will return to North Sumatra to inspect several infrastructure projects, such as railways and toll roads.

On the last day of his working visit, the President will inspect the construction of infrastructures in South Sumatra and is scheduled to arrive at Halim Perdanakusuma Airport, Jakarta, on Thursday (3/3) afternoon. (TKP/SLN) (RAS/MMB/YM/Naster)