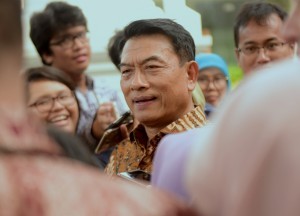 Presidential Chief of Staff Moeldoko answers questions from the journalists after a Limited Cabinet Meeting at the Office of the President, Jakarta, Tuesday (8/1). Photo by: Rahmat/PR.

Everyone must uphold principles of democracy and abide by the rules in order to ensure a better democracy, according to Presidential Chief of Staff Moeldoko.

Systematic delegitimation of the Election Commission and the Government shall be avoided, Moeldoko told the journalists after a Limited Cabinet Meeting at the Office of the President, Jakarta, Tuesday (8/1).

Moeldoko went on to say that democracy should always be preserved and fake news and hoax should be avoided because they will threaten the future of the nation.

For the record, Chairman of the Election Committee (KPU) Arief Budiman on Thursday (3/1) said that a rumor of seven containers of cast ballots in Tanjung Priok is hoax.

The KPU and the Elections Supervisory Agency (Bawaslu) went to Tanjung Priok Port on Wednesday (2/1) in response to the rumor.

We confirm that there were no containers of cast ballots, he said. (RSF/RAH/ES)