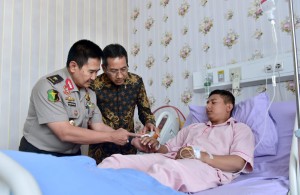 Head of Presidential Secretariat Heru Budi Hartono on behalf of President Joko “Jokowi” Widodo visited a number of Indonesian police officers who are being treated at Kramat Jati Police Hospital following the post-election riot on 22 May.

“Since we received the news that some police officers are wounded, the President immediately instructed me as Head of Presidential Secretariat to represent him (to visit the Police officers). I have also apologized to the victims’ families that Mr. President could not visit them in person,” Heru stated at the hospital, Tuesday (28/5).

“Earlier, there was also a request from one police officer. He asked for a bicycle. I will send it tomorrow,” he added.

In the meantime, Head of Kramat Jati Police Hospital, Police Brigadier General Musyafak, who accompanied Heru during the visit, explained that since the 21-22 May, the hospital has at least treated 60 patients (29 Police officers and 31 civilians). (BPMI/EN)