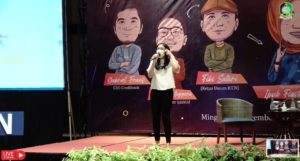 The event was organized by Cabinet Secretariat in collaboration with Ministry of Cooperatives and Small and Medium Enterprises and Banyuwangi Regency Government.

“Putri Tanjung has initiated or received a direct order from the President to mobilize MSMEs through Digital Heroes program, considering that digitalization is crucial in the current era of technology,” Deputy Cabinet Secretary for Administrative Affairs Farid Utomo said in his opening remarks.

Farid revealed that Banyuwangi was chosen as the venue for the roadshow because this regency has the potential and energy to develop and to be more prosperous. As an example, Banyuwangi has extraordinary natural potential that can be developed by MSMEs digital heroes.

“This is what MSMEs digital heroes from Banyuwangi should develop. Do not forget, do not abandon nature sustainability, but promote the culture instead,” he said.

For the record, 80 young entrepreneurs from Banyuwangi participated in the event and it was also virtually attended by 300 people.

Presidential Special Staffer Putri Tanjung said that entrepreneurs are people who are able to see problems and create solutions that have an impact on many people, especially potential consumers.

“We are problem-solving agents. There are many problems in Indonesia. We, as entrepreneurs, see it as an opportunity,” she said.

On that occasion, Putri highlighted several steps to become a creativepreneur. They are as follows.

First, seek and generate ideas that can arise from things we like, then see problems in the community and find out the needs and desires they might have.

“The idea must serve as a solution to solve problems and must be innovative. It must be different,” she said.

After having a business idea, the next step is to determine a business model to realize the idea. According to her, the business model can be found out by watching videos on YouTube and surfing on Google.

Afterwards, Putri continued, the next step is to create SMART (Specific, Measurable, Attainable or can be realized, Relevant, and Time based) goals.

“Then, set priorities. When we have too many projects, we must know the priority, create a priority matrix. Most importantly, we must prioritize projects that are low effort but have a big impact. Second, look for a bigger effort but the impact is way bigger. Leave the small impacts. It really helps us to be focused,” she said.

Furthermore, the most important thing is to be consistent and agile or always adapt. These two things must be carried out in a balanced manner so that the business can survive.

At the end of her presentation, Putri also urged young people and MSME entrepreneurs to continually boost their courage to make attempts, take steps, and believe in themselves.

“Everyone has their own formula. There is no standard formula to become an entrepreneur. Learn from their processes and use tips and tricks from them that suit us. When we learn from other people’s mistakes, we won’t make the same mistakes and we can create our own formula,” she remarked. (TGH/FID/AIT/UN) (RIF/MMB)