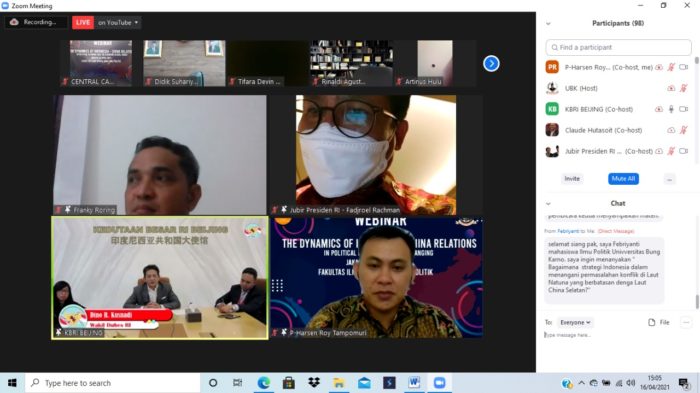 The Presidential Spokesperson Fadjroel Rachman on Friday (16/04) became the keynote speaker at the webinar on “the Dynamics of Indonesia-China Relations in Political Economy and the Changing Global Order.” Image source: Team of Special Staffer to the President.

The Presidential Spokesperson Fadjroel Rachman on Friday (16/04) became the keynote speaker at the webinar on “the Dynamics of Indonesia-China Relations in Political Economy and the Changing Global Order.”

“I hope the relations and cooperation between the two countries will be stronger and mutually beneficial,” Fadjroel said, quoting President Joko “Jokowi” Widodo’s statement at the 70th Anniversary of Indonesia-China Diplomatic Relations in 2020.

Fadjroel, who is also the Special Staffer to the President, said that the partnership between the two countries has enormous potential for the future.

In the meantime, the Indonesian Ambassador to the People’s Republic of China (RTT) and Mongolia Djauhari Oratmangun said that diplomatic relations between Indonesia and China have started on 13 April  1950 or 71 years ago. Since 2005, the two countries have improved the relations to a strategic partnership.

The dynamics of the relationship between the two countries, Djauhari added, rests on three pillars, namely politics and security, economy and development, and social and culture.

In the political and security pillar, Djauhari said, the two countries have cooperated through bilateral, regional and multilateral cooperation.

Regarding the economic and development pillar, Djauhari explained that in 2020 the growth in export volume between Indonesia and China had reached US$ 78.9 billion.

He also said that in the tourism sector, there were 2.1 million tourists from China visiting Indonesia in 2019, while in 2020 the number of visits decreased due to COVID-19 pandemic.

On the ocassion, Djauhari also explained the digital economy potential of the two countries.

Regarding the social and cultural pillar, the Ambassador said that cultural exchanges between the two countries have been going on for hundreds of years and the number of students from Indonesia studying in China is approximately 16,000 people.

Djauhari further said that one of the cooperation measures between Indonesia and China during the pandemic is health infrastructure, including the supply of vaccines to Indonesia. (Team of Special Staffer to the President/UN) (RI/LW)