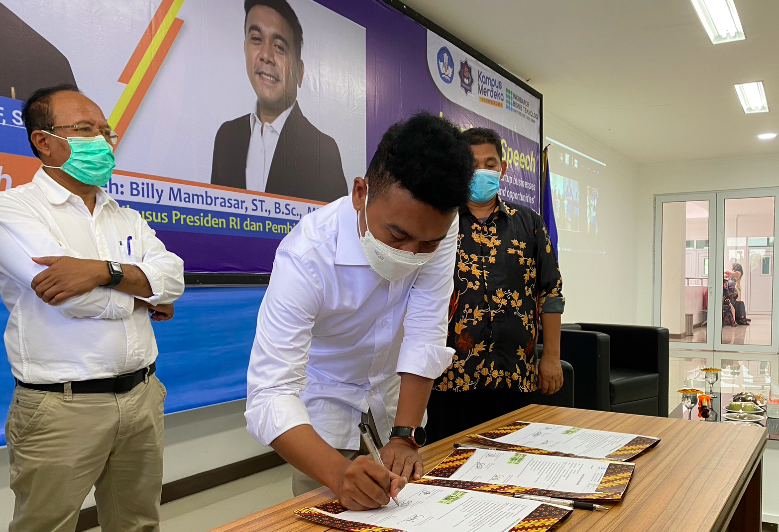 “Billy plays the role of as a director and mentor for our students in this incubation,” the Rector said.

Meanwhile, Billy expressed hope that this incubation center can reach the Southeast Asia region or even global.

Billy stated that one of the focuses of President Joko “Joko” Widodo in the second term of his adminisration is to focus on the HR development. In this effort, Ministry of Education and Culture encourages the implementation of educational programs with the philosophy of “Merdeka Belajar” (freedorm to learn).

“One of the things being done to encourage Indonesia’s advancement is to create entrepreneurs who will drive the economic sector and one of them is by encouraging more business incubation centers such as that of Teuku Umar University,” he said.

This incubation center is a follow-up to Billy’s meeting with Minister of Education and Culture Nadiem Makarim last year, who agreed on the Bring Change (Bawa Perubahan) Program. One focus of the program is the creation of an entrepreneurial ecosystem, by establishing business incubation centers in various outer regions, and one of them is in Meulaboh, Aceh.

Through the Bring Change Program, Billy explained the digital education concept model, by using the internet to increase literacy of the nation’s youth, reduce illiteracy, develop English language skills, and most importantly instill an entrepreneurial spirit from an early age for students in the outermost, disadvantaged, and frontier areas. (Team of the Presidential Staffer Billy Mambrasar/UN) (FI/MMB)