Press Release: The Bandung Historical Walk, The Peak of AACC2015 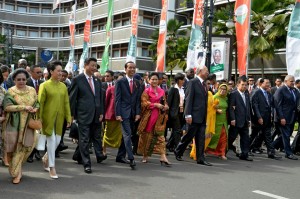 The Bandung Historical Walk, The Peak of AACC2015

ACC2015, Bandung Asia Africa Road, 24th of April 2015  The peak of the High Level Meetings (Summits) of the sixtieth anniversary of the Asian African Conference ended in Jakarta last night, however its commemoration is about to start in Bandung by the host country.

They each wore their national attires in diverse patterns and colours and were warmly greeted with applause and happy cheering by the people along Asia Africa road.

The famous walk by the delegates is named The Bandung Historical Walk, this historic moment started around 09:00 a.m. in the Braga area and and ended with all the delegates entering Gedung Merdeka together following the order of the day of the AACC2015.

Meanwhile, around this momentous event there are more than 20 side events to commemorate this auspice day.

In his closing remarks, The President of the Republic of Indonesia, H.E. Joko Widodo as a Co-Chair of the seventh and final plenary session alongside the Co-Chair President of the Republic of Zimbabwe, H.E. Robert Gabriel Mugabe, yesterday in Jakarta announced the outcome documents of the Summit. The President stated in a press conference, The Asian African Summit was successfully convened on the 22nd to the 23rd of April 2015; It was participated by 91 Asian and African countries, 15 observers, and 10 international organizations. He added, 21 heads of state/governments of Asian and African countries, including Indonesia, attended the Summit.

The Replublic of Indonesia President also  affirmed, I am pleased to inform you that The Asian African Summit has produced 3 important documents, namely: 1) Bandung Message 2015; 2) Declaration on Reinvigorating the Asian African New Strategic Partnership; and 3) Declaration on Palestine. During a press statement he explained, the Summit has agreed to declare today (24/04) as Asia Africa Day, also declaring Bandung as the Asian-African Solidarity Capital and supported the establishment of the Asian-African Centre.

The final day of activities is to be concluded today after the enactment the Bandung Walks from the Savoy Homann and Preanger Hotels to Gedung Merdeka to commemorate the first Asian African Conference of 1955.  Ends –