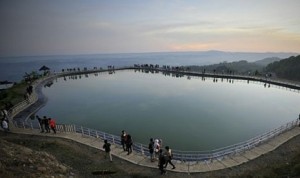 Ministry of Agriculture, Andi Amran Sulaiman said the government has allocated up to Rp 100 billion to build thousands of embungs (retention basin) in Indonesia, in order to reduce the impact of drought.

Andi Amran says so when reviewing the paddy fields, which suffered drought due to dry season in the District Pakel, Tulungagung Regency, East Java, on Wednesday (29/7).

Coming by helicopter together with Pangdam V/Brawijaya, TNI Major General Eko Wiratmoko after attending the harvest in Munjungan, Trenggalek, Minister Amran willing to plunge directly into the fields that have drought up to the ground surface looks cracked.

According to Amran, a potential drought, which affects all productive agricultural land reached about 50 thousand hectares.

“This is the impact of El Nino that causes drought longer. However, the impact was much reduced compared to last year with the same period reached approximately 159 thousand hectares,” he explained.

He argued that the decline could not be separated from the decision to form a special team to deal with the impact of drought that occurred from March to April.

In the village Kiping, Minister of Agriculture along with the ministry staff, Logistics Agency (Bulog), Regent Syahri Mulyo, Vice Regent Maryoto Bhirowo and some SKPD, they were plant rice paddy fields directly.

The local farmers were not wasted on the minister’s visit. They complain directly to the Minister of Agriculture. Among other drought problems frequently faced by farmers and the price of rice.

Farmers also ask the help of a cropping tool, because the existing aid assessed insufficient for farmers.

“Here, the threat of drought. We are pleased to minister of agriculture to be able to help, “complained Warno one farmer in the village of Ngrendeng to Minister of Agriculture, after the harvest.

Responding to the complaints of the farmers Tulungagung, the Minister of Agriculture Andi Amran Sulaiman ensures that he has prepared an assistant of 10 units water pumps.

The pump is ready to be sent to Tulungagung, and directly provided to farmers to cope with water shortages.

For machinery plant, Minister of Agriculture has also prepared and will be given to farmers Tulungagung as soon as possible.

“The pump will arrive this week. We have prepared and will be sent immediately,” he said. .(Humas Kementan/ES)