Prime Minister of Timor Leste: We will not be Surprised if Indonesia Becomes a Big Country 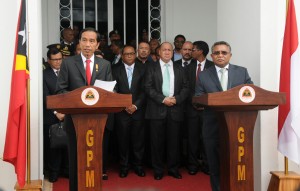 Prime Minister of Democratic Republic of Timor Leste, Dr. Rui Maria Araujo, thought that under the leadership of President Joko Widodo, Indonesia becomes one of dynamic countries both in regional and global levels.

We will not be surprised if Indonesia becomes one of the largest countries in the world, Prime Minister Rui said in his press statement after receiving the visit of President Joko Widodo at the Prime Minister Office, Dili, Timor Leste, on Monday (26/1) at 2.15 p.m. local time.

The Prime Minister appreciated the signing of cooperation between the Government of Indonesia and the Governement of Timor Leste on marine and fisheries, specifically on sea border.

Both countries have a better understanding in sea border issue and have made several decisions on this issue, the Prime Minister said.

Indonesia and Timor Leste are going to establish other cooperations in several sectors, such as Energy and Mineral Resources, Marine and Fisheries, Archives Affairs, and Youth.

According to Prime Minister Rui, this cooperation shows a very strong relations between the two countries.

Meanwhile, in his press statement, President Joko Widodo said that Timor Leste is the first country that he visits in 2016.

In the bilateral meeting, Indonesia and Timor Leste had an intention to settle the issue of land and sea borders at the first quarter of 2016.

In the sectors of Energy and Mineral Resources, infrastructure, and State-Owned Enterprises, Indonesia will continue to enhance the cooperation with Timor Leste.

In addition, in banking and telecommunication sectors, the cooperation will also be enhanced, involving (among others) PT Telkom and Mandiri Bank.

In people to people contact, Indonesia has signed cooperation in aviation and aerospace development.