Priority for Marginal Farmers, the Government Will Allot 9 Million Hectares of Land 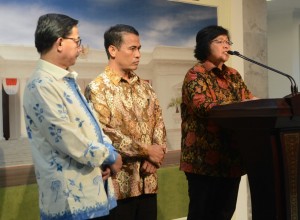 Minister of Environment and Forestry, Siti Nurbaya convey a press statement, in the office of President, Jakarta, Friday (27/2).

President Joko Widodo (Jokowi) accompanied by Vice President Jusuf Kalla led the limited cabinet meeting regarding the availability of 9 million hectares of land to be distributed to the people, at the Presidential Office, Jakarta, Friday (27/2) afternoon.

“Essentially, we were asked to explain about the availability of 9 million hectares of land program along the period of this government,” Minister of Agrarian Affairs and Spatial Planning, Ferry Mursidan Baldan said to reporters after the limited meeting.

Minister of Environment and Forestry, Siti Nurbaya who participated in a press conference said that the meeting which chaired by President Jokowi implemented to improve the welfare of marginal people through the implementation of the cabinet program.

According to the Ministry of Environment and Forestry, the land could come from the land of the authority of the National Land Agency (BPN) or from the production forest area that could be converted as the land will be released into the farmers land.

Minister of Environment and Forestry hope, this policy could add to the ownership of agricultural land from the average of 0.8 hectares to 2 hectares for each farmer (Humas Setkab/ES)