Proposed by DPD, President Jokowi Instructs Bill on Archipelago Insight to be Studied in Meticulously 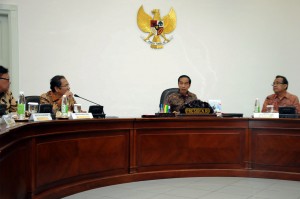 President Jokowi led the limited meeting to discuss the bill on Archipelago, at the Presidential Office, Jakarta, Tuesday (17/11)

President Joko Widodo (Jokowi) led the limited meeting to discuss the Bill (draft law) about Archipelago, which was proposed by the Regional Representatives Council (DPD) and subsequently delivered by the Parliament to the Government, at the office of the President, Jakarta, Tuesday (17 / 11) afternoon.

President emphasized that the Government respects and appreciates the DPD initiative to propose a bill on the Archipelago. However, due to the Indonesian Archipelago The issue is important, and the Government can give the views and determine the right attitude. Therefore, the President instructed the Minister of Home Affairs, Ministry of Justice, and the Minister of Defense and Minister of Foreign Affairs to learn comprehensively about the urgency, purpose, benefits, relevance, substance and implications of the bill.

“I ask that this bill really be studied thoroughly, carefully and consider all aspects of the constitution refers to the philosophical, juridical, sociological and historical aspects,” asked President Jokowi.