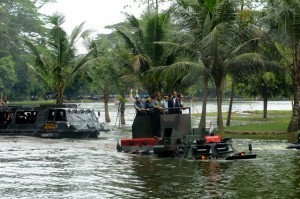 Photo caption: President Jokowi, accompanied by TNI Commander, TNI Chiefs of Staff, and Chief of the Indonesian National Police, rides an Anoa Amphibious tank to the location where the 2017 TNI Leader Meeting was held at the Headquarter of the TNI in Cilangkap, East Jakarta, Monday (16/1) (Photo by: Oji/Public Relations Division)

The Tank, manned by two female TNI soldiers – Serda (K) Lutfiah and Serda (K) Melysa Situmorang  began the trip at the main gate of Delta III, crossed a lake located inside TNI Headquarters in Cilangkap and ended the trip at the Gatot Subroto Hall, where the Meeting was held.

When crossing the lake, President Jokowi admitted that he was nervous. We were all also nervous, President Jokowi said, referring to the Commander of the TNI General Gatot Nurmantyo, three TNI Chief of Staff and Chief of the Indonesian National Police (Polri) General Tito Karnavian who accompanied him riding the Tank.

According to the President, the Tank is of high quality and can compete with products from other countries. If the Tank can operate in the water, its good. When it enters the water, it was very smooth and it can go back to land, the President said.

President Jokowi added if the production cost can be reduced, Indonesias defense industries will be able to manufacture competitive products in the markets and it will be easy to sell them. We must not depend on orders by the TNI and the Polri. Of course, the TNI and the Polri must order them to PT. Pindad. But will it always be like this? Of course, not. We have to be able to sell products to other countries, President Jokowi said.

President Jokowi also noted that good products like the Tank must not be sold at home only. The President believes that if the product has a good quality and a competitive price, it can compete with products at international level.