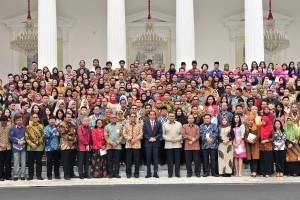 President Joko Jokowi Widodo emphasized that in todays increasingly competitive world, the role of public relations is very pivotal. He cited an example, for the last few years, the Government has improved infrastructure facilities, such as has extended airport runways, repaired terminal buildings, improved transportation system, hotels and so on.

Nevertheless, it is all useless if the promotion and news do not spread accurately. Travelers will still have no interest to come, said President Jokowi in his remarks at the Opening of the National Public Relations Convention 4.0, at the State Palace, Jakarta, Monday (10/12).

Thus, the President continued, public relations has a vital role to disseminate positive messages and the achievements of the institution to the public in order to build public trust and good reputation. Public relations also have to tackle bad issues, hoaxes, slanders, hate speeches that can damage the image of the institution, the President added.

According to President Jokowi, those tasks applied to all public relations for a company as well as for the Government,

On that occasion, President Jokowi also explained that the current public relations works are much assisted by machines equipped with artificial intelligence technology. The role of public relations personnel is also slowly replaced by computers and robots, he added.

Therefore, the President reminded that mastering the latest technology is very important to catch up with the trend.

However, he further said, public relations works will not be taken fully by artificial intelligence since machines are controlled by humans. Human is still needed to operate the machine. Similar to public relations, it still needs a human to design the policy, President Jokowi said.

In his closing remarks, the President invited all public relations personnel to continue to spread optimism and to uphold civilization, wisdom, creativity, and social responsibility that can educate the nation and inspire each other so that Indonesia will gain a great reputation and be highly respected. (FID/JAY/ES)