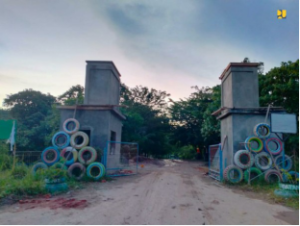 Phtoto by: Ministry of Public Works and Public Housing PR

In a bid to boost community’s economy and equitable development to reduce disparities in border areas, Ministry of Public Works and Public Housing has supported the development of infrastructures in these areas. This year, it has started the construction of Tanjung Harapan waste landfill (TPA) to improve sanitation services for the people of Nunukan Regency, North Kalimantan Province.

“The construction of city-scale waste management infrastructure is considered effective for the volume of waste that is not too large, so that waste reduction can be carried out starting from the source,” Minister of Public Works and Public Housing Basuki Hadimuljono said as quoted from the Ministry’s official website.

In addition to infrastructure development, clean and healthy lifestyle of the community can also be a solution to the problem of increasing household waste that is in line with the increase in the population of Nunukan, Basuki added.

The construction, which began on 26 January 2021, is a development of the existing landfill which was built in 2012. As of 23 August, the construction progress has reached 65.22 percent and the landfill is targeted for completion in November this year to serve as many as 77,885 people or 15,577 families on Nunukan Island.

In the meantime, Head of the Ministry’s Settlement Infrastructure Office (BPPW) for North Kalimantan Nuris Wahyudi said that the facility will use a sanitary landfill system aiming to minimize the impact of pollution in water, soil, and air. “The facility will be environmentally friendly when going operational,” he added.

The construction work includes the landfill zone, road access to the site, drainage, vehicle washing stations, heavy equipment hangars, weighbridges, perimeter fences, culverts, gates, and guard posts. The construction of Tanjung Harapan waste landfill is under the responsibility of the Ministry’s North Kalimantan BPPW of Directorate General of Cipta Karya (Human Settlements Development) with a budget of Rp12 billion from the State Budget.

For the record, Nunukan is one of the regency adjacent to the eastern Malaysia or Sabah. Tanjung Harapan landfill is located on Jalan Yos Sudarso, South Nunukan District and can be reached from Tarakan City in about 3 hours using a speed boat plus 40 minutes by land from Lim Hie Jung Harbor, Nunukan. (Ministry of Public Works and Public Housing PR/UN) (GWH/LW)