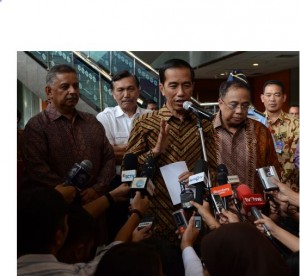 President Jokowi was accompanied by Managing Director of PLN provides information to journalists, at the headquarters of the PLN, Jakarta, Tuesday (7/4)

President Joko Widodo (Jokowi) visited the headquarters of PT (Persero) State Electricity Company (PLN), on Jl. Trunojoyo, Jakarta, Tuesday (7/4) noon. On this occasion, President Jokowi met the officials of PLN, ranging from CEO Sofyan Bashir to the Heads of Division, and giving spirit to achieve the procurement target of 35 thousand megawatts, which should be achieved within a period of five years.

The President admitted, actually the target that is given is not easy, because previously, the company (PLN) did not managed to achieve the target of 10 thousands MW for eight years.

“Therefore, I need to come here to convey directly to the management, the General Manager (GM), Head of Division (Head), that this target does not mess around, and must be achieved with hard work,” Jokowi said in front of the media after provide guidance to all levels of management of PT PLN.

The President said that this year has done the calculations, is likely to be achieved 11 thousands MW and next year approximately 10 thousands MW. “So, in two years reached by 21 thousands MW, so the remaining three years will be lighter,” he said.

The President explained, without electricity is not possible to build industries, such as tourism industry, special economic zones, and household electricity in all cities. Especially outside Java, this had a deficit of electricity, not only in oneor two provinces, in almost every province.

“Because we are late, we want to pursue this,” the President said.

Government, said President Jokowi, promised to help fix regarding licensing, land acquisition so that the target can be achieved.

According to the President, to achieve the target of 35 thousand MW needed enormous funds of around Rp 1,200 trillion, so if undertaken by PLN for many decades will not be completed. Therefore, the source of funds could come from the state budget, PLN loans, there is also from the IPPs. Much investment from local and foreign.

“The most important thing there is electricity, no deficit, people can enjoy electricity at a low price,” said Jokowi.