Pursue the Target of Dwelling Time to 4.7 Days, Government Will Appoint the Port Authority 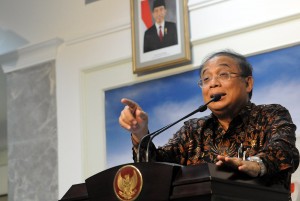 The government has made a commitment to cut dwelling time, which at this point average of about 20 days to 4.5 to 4.7 days only. One of the efforts is to propose the existence of the Port Authority who is holder of the activities control in the port.

Coordinating Minister for Maritime added, the Port Authority synchronized its echelon so as not to lower than the other ministries / institutions. He mentions, according to the plan, Port Authority in Tanjung Priok is proposed to the Minister of Administrative Reform and Bureaucratic Reform (PAN-RB) in order to become the official which is equivalent to the echelon II A, or equal to the harbor master or Customs.

In addition to proposing the existence of Port Authority, according to the Indroyono, Minister of Transport has the task to form a damage control center or crisis center or call center in the port.

“There will be representatives from 16 ministries / institutions and the online system to see what are the problems that hamper the acceleration of dwelling time in the port,” said Indroyono. While the Minister of Finance will immediately establish a permanent institution of the Indonesian National Single Window (INSW), who had been under the Director General of Customs, it will be the Technical Execution Unit (UPT) is permanently under the Ministry of Finance.

Earlier, Coordinating Minister for Maritime Indroyono Susilo argued, after getting the assignment from the President to address the problem of port, especially in the five (5) big ports, i.e., in Belawan, Tanjung Priok, Tanjung Perak, Makassar and Sorong, his team has been working for 1 week to provide recommendations dwelling time reduction as low as possible.

From the review of the team at the Port of Tanjung Priok for example, according to the Coordinating Minister for Maritime, here there are many temporary shelters. He said there were 40 (forty) temporary shelter for containers owned by various companies who separately, which is not in an area but also outside of port area.

From the initial study, the Coordinating Minister for Maritime dividing the dwelling time in three parts, namely: Partners line or the green line; yellow line; and red line.

The government, according to Indroyono, wants to solve the problem. Therefore, to make the target dwelling time at ports of just 4.7 days, it will be divided into three, ie: first, to pre-clearance that is, before entering the Customs of 2.7 days. Second, to custom clearance at customs of 0.5 day (half day), and the last to post clearance straight out of about 1.5 days. “So all completed in 4.7 days,” Indroyono said.  (Humas Setkab/ES)