Putin: Russia and Indonesia are Linked by Long-standing and Close Ties 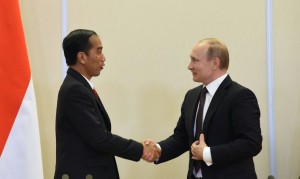 President of the Russian Federation Vladimir Putin in a joint press conference with Indonesian President Joko Jokowi Widodo on Wednesday (18/5) local time said that Russia and Indonesia are linked by long-standing and close ties and their origin was Russias sincere friend, Indonesian President Sukarno.

I would like to note that Russia and Indonesia are linked by long-standing and close ties. At their origin was this countrys sincere friend, Indonesian President Sukarno, Putin said in his residence in Bucherov Rucey, Sochi, Russia.

Putin also said he and President Jokowi also recalled that 60 years ago in 1956, President Soekarno visited Sochi for talks with the Soviet Union leadership.

President Putin also said that his meetings with President Jokowi was very substantive and constructive.

I am sure that it is within our power not only to maintain this pace, but also to provide an additional impulse to the further development of our business ties, Putin said.

President Putin also said that the consistent interest within the business community in stepping up joint efforts is backed up by a regular exchange of business missions with the participation of representatives of leading Russian and Indonesian companies.

During the talks, Putin said that the two leaders also have agreed to provide systematic assistance to business circles in the two countries and to create a favorable environment for deepening investment and industrial cooperation.

We have also discussed the idea of creating a free trade zone between Indonesia and the Eurasian Economic Union, Putin added.

Russia, Putin said, is also ready to provide all the necessary assistance to Indonesia in the projects implementation, including a joint project that was launched last year: a railway line in Kalimantan over 190 km long, to be built by Russian Railways company in conjunction with its partners.

The Russian President also revealed plans including the development of coal fields, the production of ferronickel, manganese dioxide, alumina and more.

Our companies are ready to provide Indonesia with high-speed hydrofoil vessels, catamarans and floating piers, and to supply modern equipment for satellite vessel monitoring, Putin added.

He further said the efforts of continous improvement of people to people contact of the two countries. Russia have provided one hundred study allowances for Indonesian citizens for this academic year and there will be another 100 study allowances next year.

During the bilateral talk, Putin added, both leaders also addressed global and regional issues, including the fight against terrorism and extrimism.

Our countries coordinate their steps in dealing with these threats. We have agreed to expand contacts between our defense, security, and law enforcement agencies, Putin concluded. (TKP/UN) (Naster/YM/EP)