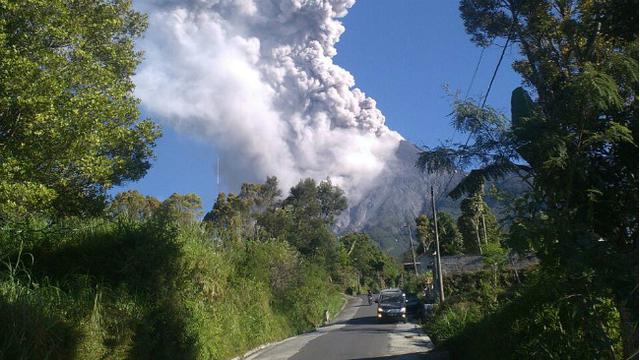 The Volcanology and Geological Hazard Mitigation Center (PVMBG) has reported an eruption at Mount Merapi in Yogyakarta province on Sunday (17/11) at 10:46 Western Indonesian Time (WIB).

The eruption was recorded on a seismogram with a maximum amplitude of 70 mm and lasted for 155 seconds which created 1,000 meters of eruption column.

“The ash carried by wind that blew to the west and produced thin ash rain in parts of the rural village of Banyubiru Dukun, Magelang regency,” Head of the National Disaster Management Agency (BNPB) Data, Information and Public Relations Center Agus Wibowo quoted the PVMBG report on Sunday (17/11).

According to the Meteorology, Climatology, and Geophysics Agency (BMKG) observation using a Himawari satellite, volcanic ash was  no longer detected in space at 13:00 WIB, he added.

The level of activity of Mount Merapi was stated at the Level II (alert) since 21 May 2018. Potential hazards were predicted in the form of hot clouds from the collapse of the lava dome and falling volcanic material from explosive eruptions.

Following the eruption, the PVMBG urged the public to refrain from doing any activities in all areas within a 3 km radius of the mountain’s peak and anticipate volcanic ash from the hot clouds and explosive eruptions as well as lava flow, especially if rain occurs at the peak of the mountain.

Furthermore, the information on Mount Merapi activities can be accessed via radio communication on the frequency 165.075 Mhz, by telephone (0274) 514180/514192, on website www.merapi.bgl.esdm.go.id, and social media BPPTKG (facebook: infobpptkg, twiter: @bpptkg).

“We encourage the public to remain calmed and pay attention to any information released by the PVMBG,” Agus added. (Humas BNPB/ES)