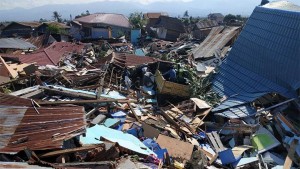 President Joko Jokowi Widodo asserted that the most important thing in post-disaster relief efforts in a number of areas in Central Sulawesi, especially in Palu and Donggala, is to respond quickly to the problems and resolve them immediately.

Do not only take care of procedures and administrative matters, but we also need to be responsive to address the problems, President Jokowi answered reporters questions after sending-off the Indonesian contingent to compete in the 2018 Asian Para Games, at the central courtyard of the Merdeka Palace, Jakarta, Tuesday (2/10). The statement was conveyed by President Jokowi to respond to reporters’ questions about the possibility of declaring the Central Sulawesi earthquake and tsunami as a national disaster.

The President also added that heavy equipment had arrived last night and the evacuation teams are using it today. Fuel supplies have also arrived but the distribution is hampered because equipments at gas stations are damaged. In order to resolve the problem, the Government will provide portable gas station in Palu and its surroundings, he said.

President Jokowi also emphasized that he already ordered relevant ministers to resolve the issues of fuel supplies, electricity as well as infrastructures recovery as soon as possible.

Yesterday, several Hercules flew from Jakarta, Makassar, and Balikpapan to bring logistics and some of them had arrived yesterday.

Regarding electricity, President Jokowi has ordered related parties to send generators, be it big or small so they can be used as soon as possible.

On that occasion, the President also urged the residents of Central Sulawesi to remain calm and continue their daily economic activities so it can speed up the recovery of the city. (GUN/RAH/ES) (GWH/MMB/Naster)