Quoting Pramoedya Words, President Jokowi: Only One That We Have, That is Bravery 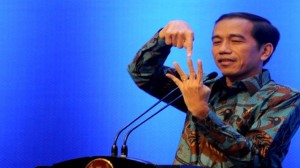 Quoting Pramoedya Words, President Jokowi: Only One That We Have, That is Bravery

In connection with issues concerning the submission of the Commissioner General of Police Budi Gunawan as a candidate for Chief of the Indonesian National Police (Kapolri), Wednesday (14/1) evening, President Joko Widodo (Jokowi) wrote the message sufficiently clear on his Facebook fan page.

“In our life, we have only one, that is bravery. If you do not have it, then what is the meaning of our lives? “Wrote Jokowi quoted the words that ever delivered by the litterateur and humanist, Pramoedya Ananta Toer.

According to the President, related to the proposal of candidate for Kapolri to replace General (Pol) Sutarman, has been carried out through several stages of the procedure. Stages including receiving a proposal from the National Police Commission (Kompolnas).

Related to the alleged of problematic account of candidate that proposed as Kapolri, President Jokowi admitted that he had asked.

“I also received this letter, clarification regarding the account. Here delivered the results of an investigation and concluded that the transaction is fair transaction”, President Jokowi said in a press statement at State House, Jakarta, Wednesday (14/1) evening.

Based on the clarification letter and the proposal from the National Police Commission Kompolnas), President Jokowi necessarily make a letter to the Parliament (DPR-RI) for approval endorsement of candidate for Police Chief (Kapolri) to replace General Sutarman

However, further Jokowi, in this process then there is the determination of a suspect by the Corruption Eradication Commission (KPK). “We respect, we respect KPK, there is a legal process here,” said Jokowi. Nevertheless, President Jokowi said, there is also the political process in the Council, he also appreciates the Council.

“After completed, then we shall decide the policy that we will take,” Jokowi said without signaled whether the policy is in line with the message quoted from Pramoedya Ananta Toer words, “In our life, we have only one, that is bravery. If you do not have it, then what is the meaning of our lives?. (ES)