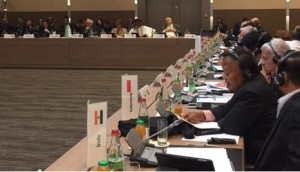 Rachmat Witoelar attends the Informal Meeting of Ministers to prepare of COP 21 in Paris, France, December 2015.

Presidential Special Envoy for Climate Change Control, Rachmat Witoelar, reveals the importance of Conference of Parties (CoP) 21 in Paris, to achieve stabilization of greenhouse gas concentrations in the atmosphere. Rachmat Witoelar said that the meeting is also important to prevent harmful effects to humans due to changes in the climate system.

“So far, Indonesia has an important role in climate change agreement, this should be maintained. Indonesia as a developing country should continue to demonstrate the active role, Rachmat Witoelar said.

On 20-21 July 2015, all the countries that attended the informal meeting of Ministers in Paris, France, shows the seriousness to discuss several issues related to the preparation of COP 21 to be held in Paris in December 2015.

Rachmat Witoelar also said that the meeting aims to support the COP 21 negotiations process politically. This is especially concerning the determination of the level of ambition and differentiation of various countries that consider the different levels of development progress of each member country of climate change convention.

The meeting which takes place at the invitation of French Foreign Minister Laurent Fabius, who is also the President of COP 21, attended by 40 delegates, including 30 ministers. On this occasion, Rachmat Witoelar doing some bilateral meetings among others with Japan, Norway, Korea, Christiana Figueres (UNFCCC Executive Secretary) and also with the President of COP 21, Laurent Fabius.

Some focus are discussed, namely: 1) the general characteristics of the agreement; 2) differentiation of various countries based on their respective capacities relevant to the issue of transparency, contributions, and implementation; 3) direction, durability, and long-term dynamism in the agreement; 4) aspects of implementation (finance, technology, and capacity-building; 5) the adaptation and loss and damage; 6) increasing ambitions through cooperation; and 7) legal related issues. (UKP-PPI/ES)