Ready to Support Fund, President Jokowi Expects the National Chocolate Production Be Number One in the World 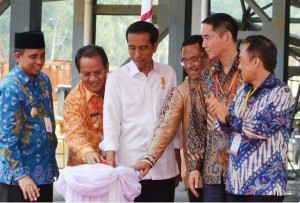 President Jokowi pressing the siren as a sign of the inauguration of the nickel smelter construction, in Morowali, Central Sulawesi, on Friday (29/5)

President Joko Widodo (Jokowi) expects that Indonesian chocolate production could be number one in the world in the next 5-6 years.

“Currently our chocolate number three in the world, is expected within 5-6 years could be number one,” President Jokowi said after inaugurating a nickel smelter in Fatufia Village, Bahodopo District, Morowali, Central Sulawesi, on Friday (29/5).

To be able to stimulate the production, President Jokowi called for for injecting more funds in order to rejuvenate those old chocolate plants, it is done consistently.

“Insha Allah it could be number one, I’ve been several times to the place of chocolate producer. I see, not something difficult. It is just a matter of intentions, we want to or do not pay attention to the chocolate farmers,” President Jokowi said.

According to the President Jokowi, if indeed there is an intention to give more attention, that means, he added, the budget for chocolate farmers will be included in the state budget.

“If I am not mistake, this year entirely of Rp1.8 trillion. I do not know how much is given to the governor, next year will rise again”, President Jokowi said.

President Jokowi made a visit to Morowali before distributing Indonesia Health Card (KIS), Indonesia Smart Card (KIP), and Family Welfare Card (KKS), at the office of Regent Parigi Moutong page, in the afternoon.

Furthermore, using the presidential plane, on Friday (29/5) morning, the President and his entourage left the Manado to Palu, Central Sulawesi, and immediately flew to Morowali. (Humas Setkab/ES)