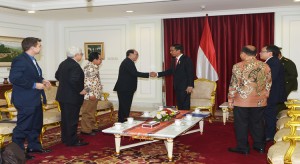 On that occasion, Prime Minister Hun Sen expressed his gratitude to the Government of Indonesia, which has trained almost 6,000 soldiers of Cambodia air force to guard the Prime Minister.

In response, President Jokowi immediately reminded, that to follow up on the training course is needed the weapons and military uniforms for the air forces of Cambodia.

“I suggested that the Cambodia to buy uniforms and weaponry from Indonesia. It will be followed (by Prime Minister Hun Sen),” Jokowi said.

The President said, it’s good if training in Indonesia, then buy the uniforms and weapons also in Indonesia.

Indonesia has conducted intensive training to thousands of Cambodia soldiers for four months under the supervision of a team of trainers supervision of the Presidential Guard (Pampampres TNI).