On the sidelines of the opening of the Asian African Business Summit 2015, that is a series of 60 Year Commemoration of the Asian-African Conference (KAA), President Joko Widodo (Jokowi) received the Prime Minister (PM) Palestine Rami Hamdalla, in room cockatoo, Jakarta Convention Center (JCC), Jakarta, Tuesday (21/4) noon.

According to President Jokowi, many things that discussed in a meeting with Palestinian Prime Minister, either on trade, cooperation to increase the capacity for Human Resources (HR), religious tourism, and others.

Jokowi President said that during the meeting, he conveyed to PM Rami Hamdalla that Palestine is the only one country that is still under occupation, still in the colonized.

“I expressed earlier that it is time to be terminated. Therefore, after this, there will be a follow-up meeting for the Palestinians. Colonization in Palestine it is time to end now,” President Jokowi said. 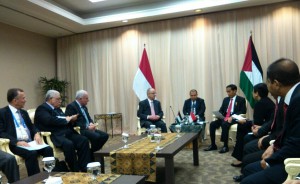 President Jokowi also mentioned, Indonesia and the Palestinians would fight for the independence of Palestine. “Indonesia will continue to fight for full membership of Palestine in the UN,” he said.

He said that after this event will be held a special meeting, that there is a concrete step towards improving cooperation between the two countries, including the Indonesian government’s plan opens Honorary Consul in Ramallah. “Earlier PM delivered will support, this will make it easier,” he said.

Meanwhile, the Palestinians, according to Jokowi, PM Rami Hamdallah requested that the volume of trade between Indonesia and Palestine enlarged, and there is a request for a tax exemption for goods from Palestine. “It is still under study. If possible be given tax incentives for the products, it will be able to enter Indonesia”, he explained.

Palestinian PM Rami Hamdalla deeply honored by President Jokowi, which since the last campaign has expressed its commitment to the independence of Palestine.