Received FIFA Delegation, President Jokowi: We Want to Get the Solution Soon 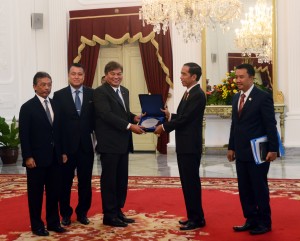 President Joko Widodo (Jokowi) asserted that the Government wants quickly to get solutions related to the problem of football in Indonesia, after suspended the Football Association of Indonesia (PSSI). Therefore, the delegation of the Federation of International Football Association or FIFA who came to see him, President Jokowi hope FIFA can find solutions to these problems.

“I just conveyed to the delegation of FIFA and AFC that we wanted to get a solution. We will also form a team as soon as possible to be able to communicate constantly with FIFA, so as to meet the solution,” said President Jokowi to reporters at the Merdeka Palace, Jakarta, Monday (2/11).

Previously, President Jokowi who accompanied by the Minister of Youth and Sports Affairs Imam Nahrawi and Chief Staff of the Presidential teten masduki has received a delegation of the International Football Federation or the Federation of Football Association (FIFA), which consists of Kohzo Tashima of Japan and Prince Abdullah of Malaysia.

The FIFA delegation came to the Presidential Palace, accompanied by the AFC Executive Committee Mariano V. Araneta Jr. from the Philippines, and the Director of the AFC, James Johnson, Sanjeevan Balasingam, and John Windsor.

Related with the conflict of football in Indonesia, according to President Jokowi, FIFA glad to see not quarrel, and want a solution from both sides, so that the solution will be met.

“This is what will be discussed by the Indonesian Team, FIFA and the AFC,” the President said.

While Menpor, Imam Nahrawai said that the meeting took place in an atmosphere of intimate and constructive.