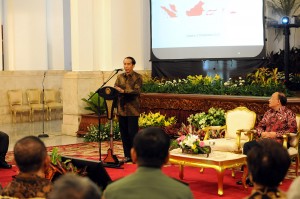 President Joko Widodo (Jokowi) reminded the participants of the National Defence Institute (Lemhannas), that the competition between countries is so very tight. “The competition as well as friction and clashes were very visible,” said President Jokowi while receiving participants the Regular Education Program of Force (PPRA) LIII and Short Education Program of Force (PPSA) XX Lemhannas in 2015, at the State Palace, Jakarta, Wednesday (4/11) morning.

As evidence of the intense competition and the occurrence of friction, President Jokowi pointing, now something small in a country that is far from Indonesia could have an effect to Indonesia.

Previously, the Governor of Lemhannas Budi Susilo Soepandji reports, for the Short Education bacth 20 is conducted for 5.5 months, which started on May 11, and will end on Thursday (5/11) tomorrow.

This program attended by 79 participants who are officials of echelon 1 and 2 within the military and police, as well as from government ministries/non-ministerial and academics. In addition, there were 11 participants from abroad, including Myanmar, Cambodia, Algeria, Zimbabwe, and Malaysia.

Present to accompany of President Jokowi on the occasion among others, Minister of State Secretary Pratikno, Cabinet Secretary Pramono Anung. (FID/RAH/ES)/Sy.