Receives Director of the IMF, President Jokowi: Not Talk about Debt, Discussion on Global Economy 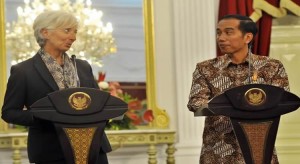 President Jokowi said, the meeting discussed about the global economic situation that recently is full of uncertainty. So absolutely not discussed the issue of providing debt.

President also said that the Managing Director of the International Monetary Fund (IMF), considered that Indonesia has a good preparedness in facing the world economic uncertainty.

Moreover, in a meeting with Crsitine Lagarde, is also presented on the appointment of Indonesia as the host of the Annual Meeting of the World Bank and the International Monetary Fund (IMF-WB) in 2018.

“I said thank you very much because in 2018, Indonesia hosted the Annual Meetings of the IMF-WB,” President Jokowi said.

President assesses the appointment of Indonesia, as the host of the meeting is the trust of international institutions to Indonesia. “They believe that we are able to carry out the international activities,” Jokowi said.

Christina Lagarde also expressed gratitude for the hospitality of the people of Indonesia during her stay in Indonesia.

He also assesses positive the various programs in Indonesia, including the strong implementation. “Many of the reform program is implemented, there are efforts to combat corruption and others,” Lagarde said.

President Communications Team, Teten Masduki, in the press release added that during the meeting the two sides discussed the world economic situation in general, as well as how Indonesia as an emerging market responding to the economic slowdown at the global level.

“Also discussed about the economic outlook in the medium term in the economic situation that is now being lethargic, including about the economic policy of the United States (US) which would have affected the world economy, particularly in Asia, as well as the Chinese government that devaluing the currency of Yuan,” Teten said.

President Jokowi, Teten continued, also shows the economic transformation that occurred in Indonesia since 1988. Several strategic measures already implemented, among others, the Indonesian government cut fuel subsidies in oil (BBM) significantly, which managed to save Rp 207 trillion for infrastructure development and assistance programs for the poor.

“The IMF appreciates the development of infrastructure and human resources that made very quickly by the President Jokowi,” Teten Masduki said.

Teten explains that the arrival of IMF Managing Director, Lagarde Christina to Jakarta actually to attend the International Conference on “The Future of Asia’s Finance”, 12 September, organized by Bank Indonesia and the IMF. (ES)Sy.