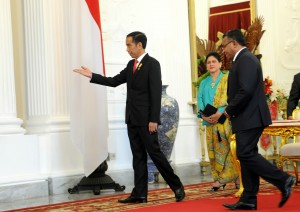 The event begins with a honor ceremony to welcome the Prime Minister Araujo in the yard of Merdeka Palace. These include a series of activities, Bilateral Meeting, Signing of the MoU, and the Joint Statement.

Therefore, President Jokowi continued, the relationship between East Timor and Indonesia is a relationship of mutual respect, mutual understanding, and we want to see in the future of our relations will be better.

According to the President Jokowi, there are two important things that he will discuss with Prime Minister Rui Maria de Araujo, namely the issue of borders, both land and sea or maritime; and second, issues relating to economic relations, both trade and investment.