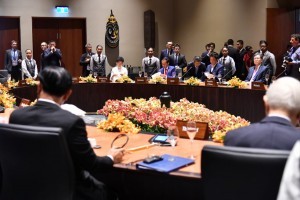 Reducing inequality is crucial in the era of globalization as it can trigger negative impacts from globalization, President Joko Jokowi Widodo has said.

“If we want to talk about inclusive development, we clearly have to talk about micro, small and medium enterprises (UMKM), which are the backbone of the economy,” the President said during the Working Lunch with APEC leaders in Port Moresby, Papua New Guinea, (Sunday 18/11).

For the record, based on the 2017 data, Indonesia itself has a total number of 62.9 million UMKMs, six million of them run their businesses online.

The world, according to the President, has entered the era of the Industrial Revolution 4.0 and this new cycle brings opportunities to adjust the orientation of development. “In the next 30 years, in line with APEC Post Bogor vision, reducing inequality must become a priority, he said.

The Indonesian President went on to say that every human being must be empowered so that they can contribute and play their roles in the worlds development. For this reason, he added, Indonesia has formulated a roadmap for Economic Policy and Vocational Training in Indonesia for period of 2017-2025.

“To make the most of the benefits of the digital economy, structural reforms must be carried out. The reforms are needed to boost investment in the digital economy sector, to empower the UMKMs, and to prepare digital-ready human resources,” President Jokowi said.

At the end of his remarks, the President stressed that the Indonesian Government would continue to invest in human capital. (BPMI/EN)