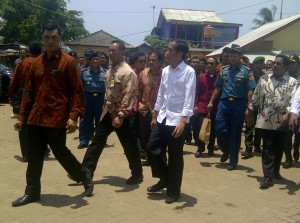 President Joko Widodo (Jokowi) considers that the actions of the President of Brazil Dilma Rousseff who refused the credentials Ambassador of the Republic of Indonesia Toto Riyanto  with a sudden, at the Presidential Palace in Brazil, Friday (20/2) at 09.00 local time, as an unusual manners.

“Yes, I think that such actions as an unusual manners,” President Jokowi told to reporters when met the fishermen who stopped him in the fish auction place (TPI) Panimbang subdistrict, Pandeglang, Banten, on Monday (23/2).

According to the President, upon the actions taken by the President of Brazil Dilma Rousseff, linking the submission of the credentials with the execution of death row of drug, including a Brazilian citizen in Indonesia, Marco Archer, on January 18, 2015 ago, and plan the second death sentence in the near future, he had asked the Minister of Foreign Affairs Retno Marsudi to recall Ambassador of Indonesia to that country.

“On Friday (20/2) I have instructed to recall our ambassador. That is my command, “he said.

Separately, Vice President (VP) Jusuf Kalla asserted that the Indonesian Government would continue to carry out the death penalty against of drug convicts although Brazil and Australia strongly protested that provision.

“We have conveyed many times that we have sovereignty and still will execute the death penalty. Keep in mind that the death sentence was not done by the President but the court, “Vice President Jusuf Kalla told to the reporters at the Office of the Vice President Jakarta, Monday (23/2).

Vice President admitted that he could understand if a country protested loudly when their citizens be put to death in other countries. However, he reminded that Indonesia has a legal provision for drug dealers, and the death penalty decision after going through court proceedings.

“Indonesia, also several times ever protested when the number of Indonesian citizens under sentence of death in the Middle East or some other country,” Jusuf Kalla said.

Vice President assessing, what the President of Brazil Dilma Rousseff who refuses the Ambassador Toto Riyanto credentials when will submit the credentials, never should have happened because Indonesia has a legal and sovereign.

“Once again we are still going to run the death penalty against the drug dealers sentenced to death, Vice President said.

Vice President also claimed to have expressed the attitude of the government of Indonesia to the Australian government, which is also to protest against the execution of death row inmate of drug, which will continue to carry out the execution.

“We also reiterate to the Australian government that the death penalty to the citizens of Australia will be executed,” Kalla said regarding the next execution of death row of drug, including two Australians, namely Andrew Chan and Myuran Sukumaran.

When asked when the execution of death row inmate to be done, Vice President said, “The execution will carried waiting for the right time”.  (Humas Setkab/ANT/ES)