Refused the Credentials of the Ambassador Totok Riyanto, Foreign Ministry Protests the Government of Brazil 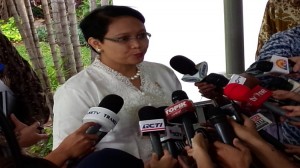 Ministry of Foreign Affairs of the Republic of Indonesia deplored the actions of the Government of Brazil related with the sudden delay on the delivery of credentials, Ambassador designate Indonesia to Brasilia, Totok Riyanto, who has been officially invited to submit credentials at a ceremony in the palace of the President of Brazil Dilma Rousseff, on Friday (20/2), at 09.00 local time.

The sudden delay conducted by the Brazilian Foreign Minister upon submission of credentials, when the Indonesian Ambassador designate to Brasilia has been in the Brazilian Presidential Palace is an act that cannot be accepted by Indonesia,” read the official statement the Foreign Ministry, as released by the website www.kemlu.go.id.

Indonesian Ambassador to Brasilia, Totok Riyanto, had arrived at the Presidential Palace of Brazil, when the event acceptance of credentials, Friday (20/2) together with the new diplomats from Venezuela, El Salvador, Panama, Senegal and Greece, but Totok Riyanto not included in the credential acceptance ceremony.

President of Brazil Dilma Rousseff linking her stance with the Indonesian Government’s decision to execute death row of drug, including a Brazilian citizen in Indonesia, Marco Archer, on January 18, 2015 ago, and plan the second death sentence on his citizens in the near future.

“We think the important thing, there is a change of circumstances, so we are obviously related the relations between Indonesia and Brazil,” Rousseff told to reporters after the official ceremony in Brasilia.

Rousseff explained that the action taken is a bit slows the acceptance of credentials. “No more out of it,” she said.

Concerning the refusal by President Dilma Rousseff, the Foreign Ministry on February 20, 2015, at 22:00, has called the Ambassador of Brazil to Indonesia to deliver a strong protest against the unfriendly action at once lodged a protest note.

The Indonesian government has also recalled to Jakarta the Ambassador of Indonesia designate to Brazil, until the new schedule of credentials submission has been confirmed by the Government of Brazil.

“As a democratic state that sovereign and has a legal system which independent and impartial, hence no foreign country or any party can interfere with law enforcement in Indonesia, including related with law enforcement to combat drug trafficking,” the Foreign Ministry in an official statement. (Humas Kemlu/ES)