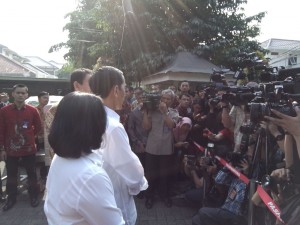 President Joko Widodo (Jokowi) again said that he would announce the names of ministers in his cabinet. According to the President, the announcement would take place on Wednesday (22/20) at the fastest. Yet he did not say the location of the announcement.

The place where the announcement of Cabinet would take place could be at Tanah Abang, Tanjung Priok, or Sunda Kelapa, Jakarta

Clarification of the names of minister candidates for Jokowis cabinet had been requested to Corruption Eradication (KPK) and Financial Transaction Report and Analysis Center (PPATK) on Friday (17/10).