Regarding Rice, Minister of SOEs Affirms Gov. Has Not Taken a Decision to Import 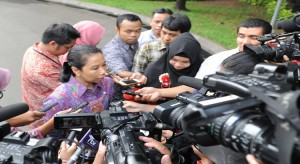 Minister of State Owned Enterprises (SOE) Rini Soemarno asserted that the government has not taken a decision to import rice.

To the reporters that the intercept at the State Palace complex before meeting with President Joko Widodo (Jokowi), Friday (15/5) morning, Rini Soemarno argued, the government still sees Bulog’s ability to absorb rice as the stock at the warehouses.

“They look up to now, with their abilities, they can absorb,” Rini said.

According to the Minister of SOEs that, to this day position Bulog has 1.2 million tons of rice. She assesses its good enough. “We hope that as of today, they are able to absorb up to 35 thousand tons,” she said.

However, Rini said that this harvest does not seem like a year ago. Last year, the harvest was simultaneous. Nevertheless, with climate change it is now more divided.

“Indeed, last April, including most large but in May, in June, there is continuing,” Rini said.

He also saw the planting program (after harvest can be planted directly again) which became the Minister of Agriculture program, that also can run smoothly. Therefore, Rini optimistic Insha Allah, this year Bulog can absorb more.

Nevertheless, the Minister of SOEs hinted that the rice imported faucets has not been closed. “The President has said if it will need any way we can import quickly,” he concluded. (Humas Setkab/ES)