Regarding the Arrest of 16 WNI, Foreign Ministry Continues to Coordinate With the Government of Turkey 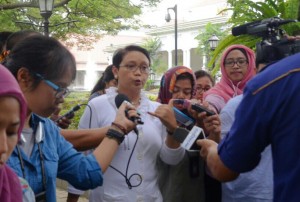 Ministry of Foreign Affairs continues to establish communication with the Government of Turkey-related the loss of 16 Indonesian citizens (WNI) who are traveling to that country, and they allegedly joined the radical Islamic group, Islamic State on the Iraqi and Syrian (ISIS).

“Well, before we set out to here, we also had to communicate intensively with our Ambassador in Ankara. We still continue to perform coordination, communication, meeting with authorities in Turkey on the issue of 16 people that suspected of WNI, who recently was in the hands of the Turkish authorities, “said Foreign Minister Retno Marsudi told to reporters at the Presidential Office, Jakarta, Thursday (13/3 ) afternoon.

However, regarding the arrest of 16 WNI by the Government of Turkey, according to the Foreign Minister, his side has not gained the identity of each person who is arrested. “The point that, we continue to make communication, coordination, and deepening with the Turkish authorities,” he said.

According to Foreign Minister, once received the news about the arrest of 16 citizens in Turkey, his side communicates directly with the Indonesian Embassy in Ankara, as well as the Consulate General in Istanbul for deepening on the issue.

“Thus at this stage, I do not quite understand and I do not want to speculate, therefore I am afraid if I say the information is not accurate,” Retno said.

“Once again I say that we are coordinating intensively with the authorities in Turkey,” Retno said as he mentioned that before going to the Palace, he also has to communicate with the Indonesian Ambassador in Ankara on the progress of the information provided by the Turkish authorities.  (Humas Setkab/ES)