Regarding the Budget Absorption, President Jokowi Remind Ministers that it Can Affect the Economic Growth 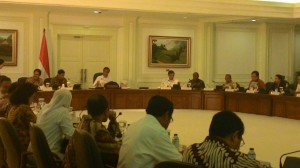 After visiting a number of places in the Capital of Jakarta, President Joko Widodo (Jokowi) gathered all Work Cabinet Ministers in the Plenary Cabinet Session, in the President’s office, Jakarta, Wednesday (13/5) afternoon.

In the cabinet session with the agenda of the Government Work Plan and Indicative Ceiling 2016, President Jokowi reminded the Work Cabinet Ministers to be careful with the ministry organizational issues. “Be careful because this series of its institutional issues can get in on budget disbursement issues,” he said.

President Jokowi asserted, he has reminded since last January on the matter. “But perhaps, not many who have a feeling that this will affect the economic growth, the economic weakness,” he said.

According to the President, until now there is Presidential Decree (Decree) that the ministry has not been signed. “There’s one, two, three, four, five, six,” he said.

Plenary Cabinet Session was attended by all members of the Work Cabinet unless the Vice President (VP) Jusuf Kalla on duty to foreign countries and Minister of State Secretary Pratikno. (Humas Setkab/ES)